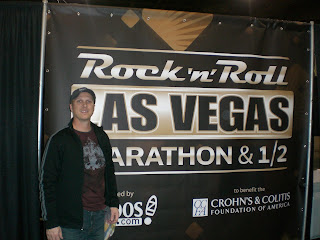 5:30am and out the door at the Bellagio in Las Vegas. I have about a mile and quarter to cover to get to the starting line at the Mandalay Bay Resort. Las Vegas Blvd is closed to traffic, so I can walk right down the street. The first cold snap of the year for the area, but its only about 38 degrees out, but the wind has been blowing for a few days.

The last week of taper had not gone as planned. I had not put any miles in since Monday. I prefer to log at least some tempo runs, all the way up to the race day, to keep the edge on. Brad Hudson calls it sharpening. The long red lights and traffic make any sort of workout hard when staying on the strip, even early in the morning. Plus the large amount of walking may have helped to tire my legs out in a different way that I was not expecting.

6:00am and I was finally at the "runners village" in the parking lot near the starting line. Competitor knows how to put on a race, but like Country Music, the mass of people make everything seem chaotic. It took 5 minutes to locate the bag drop-off area, and when I finally got my warm-ups off and in the bag, the lady was taking one or two bags back at a time and trying to sort them by last name. There was only 30 people standing in line waiting for this lady, and she was in no hurry to get going. After 5 or 6 minutes, I finally took my bag and up to another volunteer and asked her to help, which she gladly did.

6:14am and I made it to the corral #3 and listened to Cher sing the national anthem. 6:15am and the Elite men took off to fireworks  and they did a rolling start, which worked much better than pausing every 45 seconds between corral's like CMM, which I thought worked very well. So the gun fires and we are off. I've had NO WARM UP and very little stretching, oh well.

6:15am - Mile #1-9:05 - It was still dark out as we took off down Las Vegas Blvd.  About 3/4 down the street and a U-turn back in the other direction. LV Blvd is very wide and a great street to run on. All of the casino's were lit up and there was a lot of excitement. Trying to find a grove and get going, but right off the bat, I can sense that I'm not into it. I tell myself to give it a few mile to warm up and maybe it gets better. I need to average 8:20 or so for a 3:40 marathon. 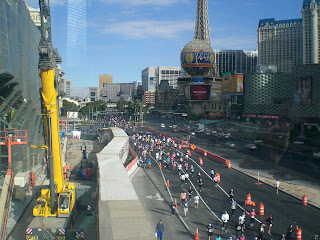 Mile #2 - #6 were the best of the race. All the way down LV Blvd as the sun was starting to rise and the casino's lit up and glowing. Looking back at the map, it was a noticeable gradual down hill all the way through the turn around at mile 8.5. About 200+ feet of downward elevation change. It was so gradual, it was hardly noticeable. Several bands and pretty good crowd support down the boulevard. Perhaps it was too early, or not much mention of the event for the locals, but the crowds are no where near as big as CMM. I was able to get into the groove, but just could not find the speed that I was aiming for.  8:29 - 8:36 - 8:29 - 8:17 - 8:24. I was at 51:15 thru mile 6.