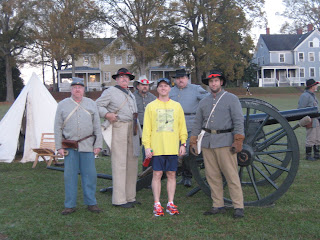 5:30am rolled around and felt like 4:30am to me. Wait. It was 4:30am central time, so up early.  The hotel was only 15 minutes from the battlefield park, but the line getting into the single lane entrance was about ¼ mile long. I have a love/hate relationship with my Garmin GPS (automobile kind) but this was one of those good times, and I saw a back road way around the traffic congestion into the park, and it only took us a few minutes to get in. Was there 40 minutes before cannon time (more on that later), and had plenty of time to get to the porta and get loose.


Of course, this being a Civil War battle site, they had rolled out a 1860’s era cannon to signal the start of the race. After the National anthem was played by bugle, the cannon woke up the neighbors for a mile around the battlefield with a MIGHTY ROAR, and we were off. The cannon made me smile deeply, and the inner-kid in me that is fascinated by all things military, had sent a chill through my body.  I was not nervous at all, since my expectations were for this to be a training run, and to seriously enjoy the moment and the run.

Here is a quick review of my planned run:

Here is how it un-folded: 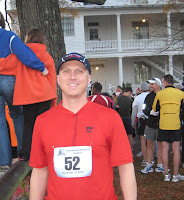 Mile 1-2 were a lap around the park entrance start/finish line area and out through a service road to the actual battlefield. I settled into the run and felt no rush to get going. Mile 1 in 9:13 and mile 2 in 9:22. I started right next to the 4:00 hour pacers but quickly lost sight of them in the crowd. They were holding a small balloon up before the race, but must have ditched it when the race began. So we finally made it off the gravel service road and out to the asphalt of the battlefield loop. Of course, I got a tiny pebble in my left shoe, and I thought there is no way that I would go 24 more miles with in there. It was more a mental thing, it did not bother me, but my mind was stuck on it, so I pulled over at the first water stop and pulled my shoe off and shook it out and back to the road in 12 seconds. My garmin is set to auto pause, so it recorded the 12 seconds stopped time.

The Running Laminator had suggested a cool drink mixture of Gatorade and Red Bull. I had mixed it before the race and was carrying it in a 20oz handheld Gatorade bottle. This was something that I had never done before (carry a bottle or the drink mixture) but it really worked for me.  The Gatorade/energy drink mixture was nice, and the ability to run right past the water stops was very good. I carried it for the first 12 miles.


This is a very small Marathon which consists of only 600 Marathoners (454 finished) and 900 Half Marathoners. Once we were past mile 2, the crowd thinned a little bit. Since I was averaging around 9:15/mile, most everyone around me was running a similar pace. I effortlessly picked up the pace to between 9:00 to 9:10 per mile, so I was starting to pass a bunch of peeps. After mile #2, I was only passed by one peep the entire race. 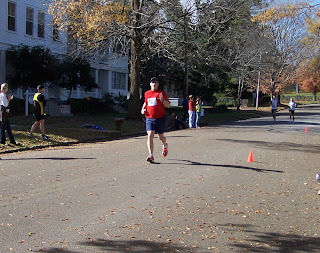 Mile 3-11 were a pretty constant 8:58 to 9:06 pace, nothing more, nothing less. This seemed like child’s play, and I was feeling fresh and full of energy. My legs were fine. Everything checked out, all systems go. I GU’d at mile 6 and 12. So, the moral of mile 3-11 were I had stuck to the plan. Time to move onto MP goal pace thru mile 20 and see how it’s going.

Mile 12-22 were pretty consistently between 8:45 and 8:50, with a 8:39 thrown in for good measure. Mile 13 brought us into the 2nd loop of the park.  And speaking of the park, just like any other park, lots of rolling hills and trees.  Of course this park also has cannon’s and monuments and I soaked it all in.  The runners were really spaced out now, but I was picking people off all along the stretch. I guess most of the faster runners were already long in front of me, and the 8:45 or so pace was faster than most at this point. I did not count the “roadkill”, but I estimate probably between 30 to 40 were run down, with no negative roadkill’s on my behalf.  That was sweet. I GU’d again at mile 18, and I walked/slowed down twice through 2 water stops, but got right back on the road after the sips. 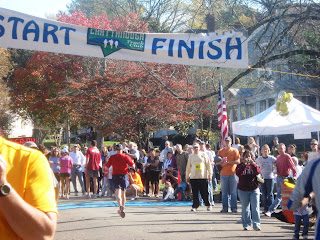 I was going so good and easy through mile #22 that I figured that I was just a natural at this. Here are my thoughts: “Wall? What wall – LOLOLOLOL” -  Yes, I’m an IDIOT.


Mile 23-24 – I started the last miles thinking, OK, let’s break this down into 2 2-mile runs. Walk in the park J.  Legs getting tired, weird cramp in my right calf that made me stumble twice. I had intended to take the last GU at mile #24, but the last water stop was #22, so I decided not to take it. Not sure if this would have helped, but it’s like not using all your time-outs in a football game, not good to leave them on the field if you really need them. My mind was finally registering that this was by far the longest I had ever run. I was just trying to hang on, so I would come up on some guys and fall in behind them. I was running on pace time so I would follow them for a bit, when I noticed they were hitting 8:45 or so. This went on for ¼ or ½ a mile at a time, before I would eventually pass them up. Then I’d find another guy to “latch on” to.  Mile 23 was 9:12 and mile 24 was 8:59. 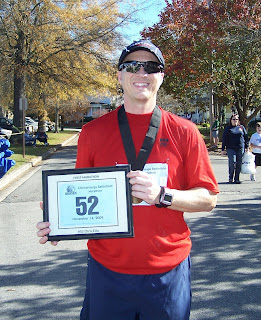 Mile 25-26 – I kept telling myself the old mantra “Pain is weakness leaving the body” and I thought of Dean Karnazas running 50 marathons in 50 days. Mind OVER matter. I had slowed down quite a bit, but still did not get passed by anyone, which amazed me. I even passed a couple dozen Half Marathoners that were still on the course. There was no one left to “draft” on, and I finally walked for 20 seconds at mile 25. I knew that I had a chance at a sub-4 at mile 24, because they had a timer that showed 3:40 at that point, so I knew that I had to average 2.2 miles under 10 minute miles. Mile 25 was 9:32 and Mile 26 was 9:10.  I passed 4 more right at the 26 mile marker and I turned back into the square at the park entrance for the “sprint” to the finish line. I finished right behind the 4 hour pacers that I started the race with, but did not see them the entire time on the course.


Mile 26.2 was blessedly downhill. I saw Steph and the girls at the designated tree and ALL THE PAIN LEFT MY BODY. They took pictures and cheered me on and I crossed the finish line and about fell down. A dude grabbed the chip off my shoe, and the girl with the finisher’s medals just handed me the medal, instead of putting it around my neck, there was no way I was bending down. They gave me a cool framed bib with First Marathon written on it. I wobbled over to the food/drink tent and ate the best banana pudding I’d ever had, after finishing a marathon. 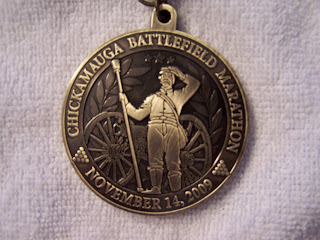