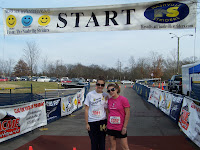 Took off to the Nashville Zoo for a little 5K run on Saturday. About 1,200 other folks showed up to run with us. People were still streaming in at the scheduled start time of 3:00, so they delayed it until 3:15.  They gave you the option to purchase a chip for official timing and around 730 people were timed and the rest un-timed. The Nashville Striders were on-site to manage the timing (but obviously not the start, or we would have started at 3:00 whether you were there and ready, or not.)

I left Stephanie and the girls and went up close to the start. I had looked up the times for last year, and thought if I pulled a 22:00 or less that I might have a chance at a age group award.

So, around 3:17 we were finally off. It's not good when the first 20 steps PAST the timer are walking, And it never fails. 240 Fred and the twins Susie Sixteen and Frannie Fifteen were up in the 1st 2 rows, and had no clue on how to pace. Slow trotting from Fred and the talking teens wondering what song to listen to on their I-Pod had me in a bind. I'm not usually one to get mad or upset, and a quick "coming through" is usually what I say. Today it was an ELBOW and a "GET OUTTA THE WAY ! ! !" It took a full 200-300 meters to get up to speed. 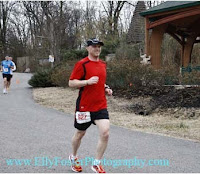 Nashville is not a typical big time zoo. It's much quainter, and they have it more setup like "strolling trough the jungle" to view the animals.  Two feet foot paths are the norm, and lots of twisting and turning. Throw is a few nice hills and downhills on gravel access roads, and this was one fun, but rather tough, race format. 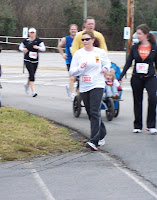 For me, it was just trying to get some speed up.  I have plenty of endurance, but with marathon training going in full steam, I have not done much any speed drills. With a combination of the twisty/turns and lack of speed work, I just could not get a sustained pace under 7:00 min/miles.  As a matter of fact, I was very fresh as soon as the race was over.  Finished in 21:55 (7:04/mile) and 42nd overall of the timed folks. I also got my first EVER Age Group award, coming in 2nd place in the 40-44 men's group (I was actually 3rd, but one of the guys in my AG placed in the Top 3 Men's Masters category.

I asked Stephanie to write as a "guest blogger" but she didn't want to. She had a good run and finished in 37:38. This was a tougher course than she ran last August. Good experience for the 1/2 marathon in the spring. Her calf's are on "fire" so she will need a round with the "Marathon Stick" to work out the kinks.

The girls. Well.. They finally came around the finish line at 47:00. I saw them and ran up to encourage them to the finish line. When I told them "lets run to the finish" the took off in a flash. They both left me in their dust, so they were holding back big time. K told me they had walked the last mile, and H said she was tired of running, so they walked. They had fun, though.

We all stayed around and ate spaghetti and salads provided by the Zoo staff. I got a back-pack for my AG award. 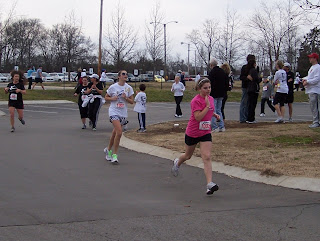