5:00AM came very early Saturday morning. I felt like I only had a few hours of restful sleep the entire night. Probably still pre-race nerves on my part, as I am still relatively new at racing. Even though the 1/2 was just another "long run" as a part of my over-all Marathon training period, I was internally pretty juiced about this run.

First, it's in my backyard, so to speak. I really enjoyed my last race in the 'boro and had heard many good and positive remarks about the race. Secondly, I was really wanting to do well in a race environment, before I went down to Chickamauga in November, where I will not acutally "race" but use as a training run (for real.)

It was plenty chilly, around 49 degrees, at 6:15 when we arrived on the MTSU campus. I had meant to come down and drive the course on Friday, but had too much to do, so when we arrived I was surprised to see the lights on the Track and Field stadium on. The whole time before the race, I had mistakenly thought we would finish the race inside the MTSU football stadium, so much to my surprise we ended up heading over to the track. Yes, it makes much more sense, in retrospect, to finish at the track instead of the football field. The vibe around the whole pre-race was very calming. No one was rushing around. The short line to the port-a-potties moved very fast. The entire feeling was just way different than the Country Music Marathon earlier this year. I guess it was probably the weather, which was PERFECT for a long distance race. I had been out running at this time of the morning twice this week for early runs, and was used to the nice chilly-ness of the weather.

After a quick potty break and a mile warm-up, I headed over to the start line with Stephanie and her Dad. (Thanks to everyone who said a little prayer for Steph's dad before his cancer surgery a few weeks ago. I'm happy to say that the doc got all of the cancer out and they have not found any cancer spread to his lymph nodes.)

My hip was feeling pretty good this morning, not really giving me any tightness. My internal  goal-time was to shoot for two hours, which means all miles under 9:09 per mile.

Races generally tend to suck you into the excitement of the moment and get you going faster than you want to. The trick is to settle into your pace, and folks with the your pace will find you. So with my eye more on my Garmin, than the road, I set out on the 3rd Annual Murfreesboro Half Marathon, better known as The Middle Half. 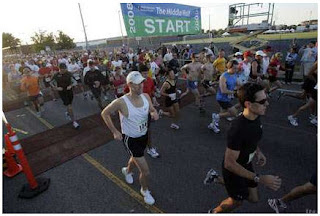 I was quickly over the starting mat and guys and gals were blowing by me in every direction. I thought, my goodness there are some fast peeps running today. I felt good going out at a 8:30/mile pace. It really felt like a jog, more than a run. The first mile came in at exactly 8:31/mile. My first thought was "ok, I have banked 30 seconds towards the 2 hour goal, let's keep this pace though mile #2 and bank another 30 seconds."

Mile #2 came in at 8:30/mile. Around this time I noticed a guy wearing a Team HCA shirt from the Country Music Marathon. I chatted with him for a minute of two, as we were running the same pace. Then I heard someone taking to the HCA guy, and it was Rick, who is the Team HCA organizer, whom I knew to be an accomplished marathoner. As he passed the other guy, I asked Rick what he was shooting for, and he said he would be happy with a 1:50. Ummm, 1:50 huh? Mentally I said: 1) we (meaning me - unless I am bi-polar and didn't realize it) have 1 minute in the bank towards the two hour goal. 2) 8:30 per mile wasn’t giving me any problems this morning. 3) 1:50 sounds better than 2:00. So I got in Rick's draft and let him pace me for a half mile or so. At some point I looked down at the garmin was saying 8:10 pace. A little too fast, so I let Rick plow on. Mile #3 clocked in at 8:19 pace. Now I mentally noted 1:40 in the bank. 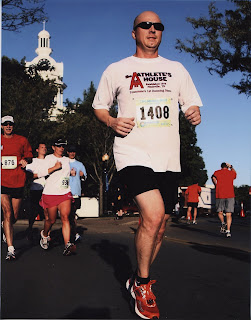 About this time, we were turning right to go to the out-and-back at the Oakland Mansion. As I was turning left, I noticed the race leader, Jacob Korir going in the opposite direction, which meant he was at mile 5.5 having already gone around the Murfreesboro square and heading out. The nearest person was at least a tenth of a mile back of him already. Seeing him motor on, kind of pumped me up, so I kept up my good pace. Mile #4 was 8:20 at the Oakland Mansion and Mile #5 was 8:22 at the square. I was beginning to think that I had the 2 hour goal, but then realized that I still had 8 more miles to go. YES, EIGHT MILES ! ! ! 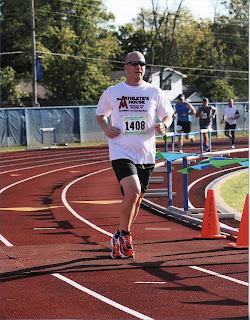 Back down E. Main St towards the MTSU campus and clocked the first 10K at 52.11. We turned down Hwy 70 and I just settled into the pace. It felt comfortable, and most everyone around me was running the same pace. I just blended in and put it on auto-pilot. I could feel the training really kick in and felt good. Now left onto N. Rutherford Blvd and I popped my GU right before the water break at mile #9. I wanted to make sure that I slowed down enough to get the water down without choking, so I walked the water stop. Wow, this really did my legs good. Mile 10 and 11 were still going strong and I averaged 8:19 and 8:16 respectively. I did not feel any fatigue until we turned onto Old Lascassus Blvd between mile 11 and 12, which heads to the finish line and the stadium. At this point, I could see the stadium in the distance and at mile 12 I knew I still had a mile to go. At this point I was picking off people at a fairly good clip. This, more than anything, kept my legs churning. I was determined to pick it up, and go strong into the stadium.

For the entire race, I was just looking at my pace, and not the time. I didn't have a clue what my time was going to be, although I knew it would be under 2 hours. Coming around the turn to the stadium, I just let go and cruised in. Coming into the stadium was very cool. I came around the turn and they called my name over the intercom, and I saw the finish line and the clock. 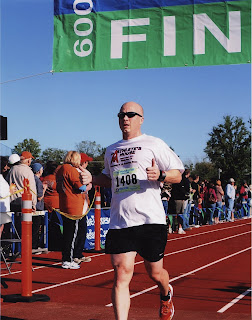 I'll have to admit, the first thing through my mind was, "if I'd just ran 29 seconds faster, it would have been 1:49", jeeeezzz. I exhaled and got the finishers medal and a drink, and felt really good. I feel like I still had some left in the tank. We'll see soon.

Headed over to the Food tent, which was fantastic. My daughter Hayley and her friend were there with Stephanie and her dad. Pizza, Chick-fil-A nuggets, bagel with cream cheese, fruit, etc. Very nice.

My sister and parents were able to make this race, and I was very excited that they were there to see.

We (Stephanie, her dad and I, not the bi-polar "we") headed over to catch her uncle finish. We also got to see my nephew Jonathon having a good finish.


All in all, a good race for me. I really did not think my fitness level was very good, because of the "not so good" long runs of late. The hip didn't really bother me, but my knee has been giving me some problems this week.

Like the famous football coaches always tells his team after a victory - "Enjoy this today, then get back to work tomorrow, we have another game to play" - this is my motto for this race. It does feel good to get a new PR for the 13.1 distance, but my larger goal is the December Las Vegas Marathon, with a "26.2 Long Run" thrown in for good measure in November, which is only 6 weeks away

Steph and me after the race

Here are my splits, for posterity sake: